If you follow my Facebook page you may have seen that we were lucky enough to win tickets to a VIP event for the Australia Day fireworks. The event was hosted by a local radio station and Squirt had heard them promoting it and begged me to win them. After a few days having the phone and radio near me at all times – we won! Squirt was ecstatic!

I picked the tickets up and brought them home to show Squirt. They were like monopoly money and included vouchers for soft drink, ice creams, food hampers and wine and came with a small esky bag. He played with them for a while and I went to have a lie down as I wasn’t feeling great.

A little while later I heard him zipping up the little esky bag and he called out “Bye!”. I didn’t think much of it, as I figured he was pretending to go to the fireworks so I called out “Bye” as did hubby who was in the dining room sorting lego (as you do).

About 5 minutes later hubby came into the bedroom and asked where Squirt was. “What do you mean?” I asked. “Well he hasn’t come back” hubby replied.

We both shot out the front door, jumped in our respective cars and headed out to look for him. I sent hubby to the local supermarket as I was sure he would have gone there with the vouchers to try and cash one in for an icecream and I went the opposite direct to check out the streets.

After hubby drove past me in the opposite direction without even seeing me, I realised that we needed to join forces so I called him and we met back at home and got in the same car. As hubby hadn’t actually gone inside the supermarket, we went back there first. The staff know us quite well so I asked if they had seen him. No one had but they called him to the front over the loud speaker just in case. Nothing.

Next we tried the shops on the other side of the block but no luck there either. I said to hubby that I thought it was time to call the police. I figured the more people keeping an eye out the quicker we would find him. Hubby was reluctant but only because he thought the police wouldn’t start looking until he had been missing for 24 hours. Just for future reference people, that only applies to grown ups…not 5 year olds! I overruled him and called them anyway while hubby drove back down our street. Just as I was giving the police the required details, we spied Squirt strolling up the street with the esky over his shoulder. I thanked the police and jumped out of the car.

“What?” he said, looking at me perplexed.

Me: “We had no idea where you were. We’ve been looking for you everywhere!”

S: “I just wanted to tell people that if they listened to the radio station they could win tickets to the fireworks as well”

S: “I was just knocking on people’s doors and telling them they could win these tickets” he said, somewhat sheepishly pulling them out of the esky.

We put him in the car and explained to him how 5 year olds are not allowed to walk the streets without a grown up.

About the same time we noticed a lady standing in the street watching us. I hopped out of the car to explain why our child had been wandering parent-less around the neighbourhood. She said she had tried to ask him a few questions:

Kind lady: Where are your parents? S: At home

KL: Do they know where you are? S: Yes (when asked about that later he replied “But you said bye!!)

KL: How old are you? At which point Squirt apparently announced he had to go and headed back out into the street.

Kind lady was actually on the phone to the police as we found him. Thank goodness for concerned neighbours.

It turned out he had lost one of the vouchers in his travels so he and I headed out later to look for it. He gave me a commentary of the houses as we passed…that’s the lady that gave me the water, there was no one home there, this house smelled funny so I didn’t go in there…. 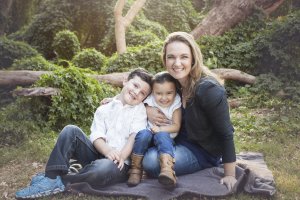